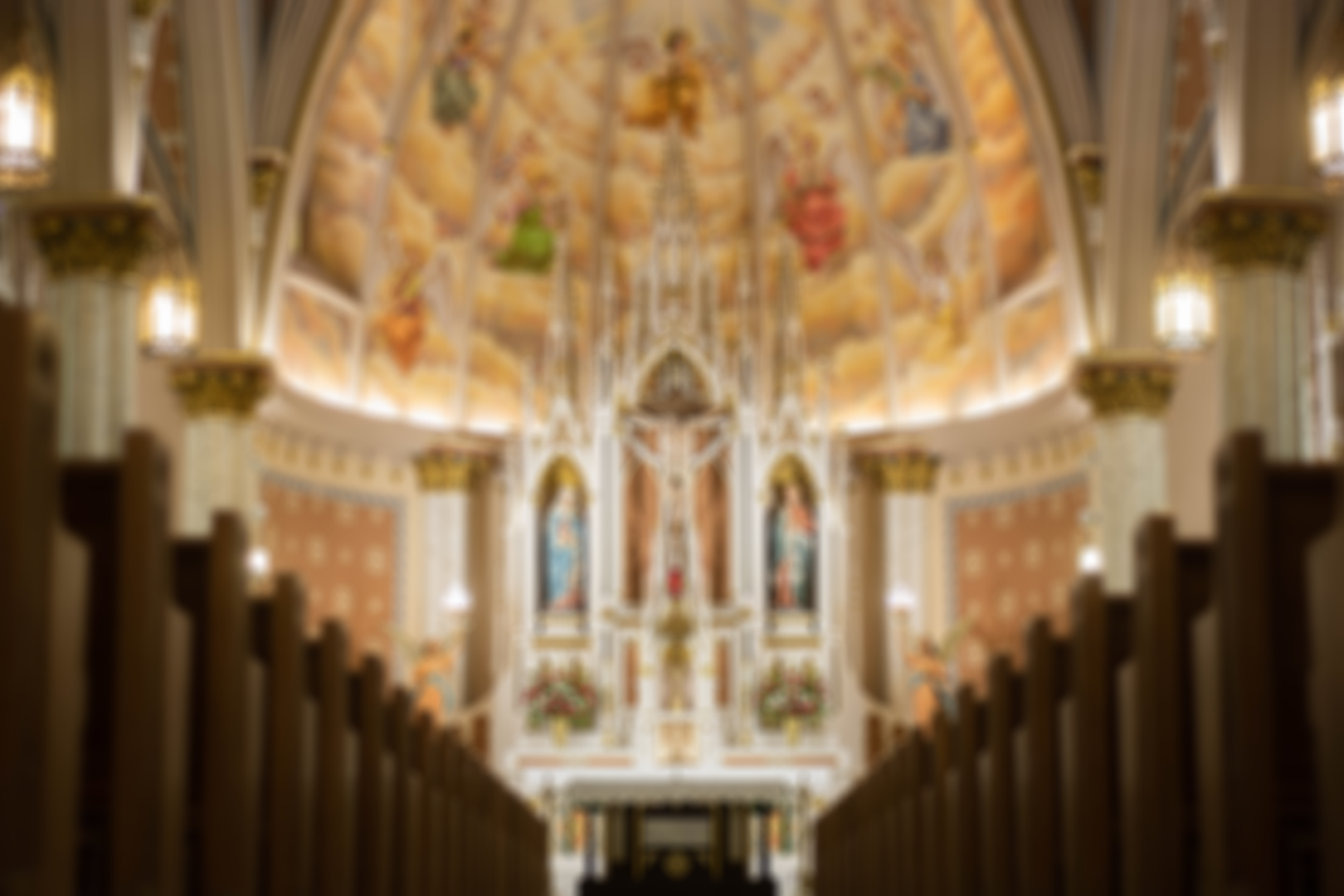 Photo presentation of the history of St. Joseph Church

Saint Joseph Catholic Church is one of the historic landmarks of Bowling Green, Kentucky, situated at 434 Church Avenue “between the river and the railroad” in the oldest part of the city. The church was placed on the National Register of Historic Places in 1975 because it possesses exceptional interest and was deemed worthy of careful preservation because of its history and artistically significant architecture.

History of the Church

Our history is an integral part of the story of Catholic Christianity in Kentucky and the circa 1859 parish provides her own thread of beauty and diversity to the colorful tapestry that is Bowling Green - Warren County history.

Kentucky, the fifteenth colony, was the first western star in the American flag when it entered the Union in 1792. Catholic settlers began arriving in Kentucky in 1775, emigrating chiefly from Maryland.  By 1808, the number of frontier Catholics had grown steadily, which led to the development of the Diocese of Bardstown, the oldest inland American diocese. Bishop Benedict Joseph Flaget and his priests rode horseback over 800 miles to minister to the Catholic flock.  In 1841 the headquarters of the Diocese of Bardstown was moved to Louisville, a much larger city and growing river port.  Shortly afterwards, Louisville became the railhead of one of the major railroad lines in the nation.

In 1856, the Louisville and Nashville Railroad began construction of a bridge over Barren River. Bowling Green became a scene of great activity as many German and Irish Catholic laborers were drawn to the area. They urgently requested a priest from then Bishop of Louisville, Martin John Spalding. He appointed the Reverend Joseph DeVries as missionary pastor of the Southern Kentucky counties. Father DeVries was born June 30, 1831 in Gerwen, Holland, came to Kentucky in May of 1853, and was ordained by Bishop Spalding in 1855. In 1859, Father DeVries was asked to organize a parish and build a church in Bowling Green.

During that summer a crude frame building was hurriedly built on a lot donated by a non-Catholic friend, Mr. Euclid Covington, a member of a prominent Warren County family. This small temporary mission sat on the corner of what is now Church Avenue and Barry Street. It served as a school building during the week and was converted to a church for Mass on Sundays. Francis Leopold Kister, a master builder from Germany, began work on a brick church.  The first Mass celebrated in the brick church was on Easter Sunday, 1860. Complete construction was delayed due to the outbreak of the Civil War. The first brick structure was finished and dedicated to St. Joseph in 1862.

Saint Joseph Church as it is today rose in stages from this small 1860 brick building. An 1870 addition at the east end provided higher and wider walls containing the semi-circular apse with the sanctuary and three altars. This served until 1884 when further enlargement became imperative. The higher walls were extended to the street, completely surrounding the original church, which was then torn down from the inside. This final addition and enlargement of the magnificent cathedral-like structure that is

Saint Joseph today took five years for completion. It was consecrated May 4, 1889.

Prior to the final expansion, Father DeVries, on leave, spent the years 1875-1877 in Europe during the time in which the Gothic Revival period of the nineteenth century was culminating in the completion of the fourteenth century Cathedral of Cologne. This may account for his enlarging Saint Joseph into the Gothic style then in keeping with the international tastes.  Altars, confessionals, canopied statuary, and stained glass windows were imported from Germany. A handsome, curving communion rail made of native hardwoods separated the sanctuary from the nave of the church. Reliefs of the Stations of the Cross and the ornate Baptismal Font have been in the church since 1889.

Father DeVries died three months after the consecration of his “miniature Cologne”.  In deference to his wishes, he was buried in a vault under the main altar. A marble slab on the sanctuary wall marks his resting place. His beloved church became his monument and his tomb.

The second pastor, the Reverend Thomas J. Hayes, served the parish for 54 years. An Irishman and fine musician, his first legacy was the installation in 1898 of the Grand Organ, built by Lyon & Healy, of Chicago. This magnificent instrument originally had eighteen ranks of pipes, a case of white quarter-oak with wood carved angel trumpeters on pedestals high above the console. The choir formed and nurtured by Father Hayes was renowned in the Diocese of Louisville for its excellence for many years.

The original (1903) fresco artwork was an exuberant interpretation of the Gothic Style of decorating all interior members to the utmost – the hemicycle (apse ceiling) filled with Rubens-like angelic hosts in clouds of glory and ribs entwined with garlands of roses. The well-known Louisville artists Charles and Guido Leber did the original artwork, and members of the same family were involved each of the three times the church was renovated and the frescoes simplified until the complete redecoration in 1986, which was painted by L. Sylvester of Bloominton, Illinois.

In 1937 the Diocese of Owensboro was created. Father Hayes was the oldest priest in the diocese and was made a Domestic Prelate (a monsignor) by Pope Pius XI in 1938. He retired in 1943 and died March 19, 1946. His successor was the Reverend Joseph Spalding, pastor for only four years before dying in an automobile accident. His mark on the church was made deeply in the hearts of his parishioners.

The Reverend Charles Patrick Bowling was only the fourth pastor of the church, 1947 – 1971, in its first one hundred years. He presided at the centennial celebration in 1959. In preparation for this occasion, the interior was again redecorated and some additions and changes were made to the frescoed walls and ceiling. The 1898 vintage Lyon and Healy “tubular pneumatic” organ was electrified by the Wicks Organ Company with a rebuilt interior instrumentation. The original Gothic wood carved pulpit that had been attached high on the front column was removed for safety reasons. Father Bowling guided Saint Joseph parish through the first liturgical changes made by Vatican Council II and also the transition period when the parish was divided and Holy Spirit Church built. Saint Joseph Parish was divided in 1969 by Bishop Henry J. Soenneker. Both parishes operated from Saint Joseph until the new church was built and dedicated on December 6, 1970. Saint Joseph became the “mother church” in Bowling Green. It is still held dear in the hearts of her former parishioners and succeeding pastors.

In 1982 the Saint Patrick Day Dinner and Raffle was established for the sole purpose of establishing a building fund to someday construct the center. In 1989, Father Alan McIntosh, OSB proposed the parish undertake the operation of bingo as an additional source of revenue. In April 1991, the parish began a weekly bingo operation where a portion of the proceeds was placed in the building fund.

Plans for the new building were drawn up and submitted for review to the parish council, finance committee and all Saint Joseph parishioners. The plan for the new parish center included 7,222 square feet of meeting area with fully equipped kitchen, and other facilities.

Final approval was given by Bishop John J. McRaith for the construction of the new building. The ground breaking ceremony was held on Sunday, May 3, 1992. In June construction began, and by November 1992, the center was complete.

On Sunday, April 25, 1993 Bishop McRaith blessed the new parish center; the celebration was followed by a parish pot luck dinner.

Our diocesan shrine dedicated to Mary, Mother of the Church and model of all Christians, began as a dream in 1973. With devotion from its earliest supporters and donations from all over the world, the shrine was constructed with the permission of Bishop McRaith at Saint Joseph Parish. It was formally declared to be a “diocesan shrine” for the Diocese of Owensboro in May, 1989.

The shrine is noted for its nine stained glass or “art glass” windows, which depict some apparition of the Blessed Mother at various times in the history of the church. The magnificent central window depicts the “Miracle of the Sun” event at Fatima in 1917. The three side windows are flanked by Saints Peter and Paul with The Divine Mercy image of Jesus adorned in the middle.

Various pilgrimages have been made to the Shrine at different times throughout the years and interest in the shrine is on the rise.

The Start of Mass in Spanish

Beginning in the early 1990’s, Bowling Green/Warren County experienced an influx of immigrants from Latin America countries.  In 1994, Father Anthony Shonis began driving to Bowling Green once a month to celebrate Mass in Spanish.  As the number of Hispanics grew, the need for weekly Mass in Spanish became evident.  Sunday Mass in Spanish was added to the schedule in August 2005, when Father Stan Puryear assumed Father Shonis’s role.  The number of Spanish-speaking parishioners continues to grow; a Saturday evening and Thursday evening Mass have been added, as well as prayer groups and a Director of Hispanic Ministry.

On June 2, 2003 the Diemer family gifted the house at 401 Church Avenue to Saint Joseph Parish with funds from the estate of long-time parishioner and family patriarch Tommy Diemer. The house was designed and built by Thomas Murphy for his wife, Carolyn, in 1922.  Mr. Murphy intentionally selected the location for the house so that his children would only have to walk across the street to attend Saint Joseph School.  The Diemer family carefully decorated the house and gave it as a residence for the parish priests.  The residence was dedicated in memory of Tommy and Josephine Diemer by the Most Reverend John J. McRaith on October 19, 2003.  In 2010, with the arrival Father Andrew Garner, pastor, and Father Joshua McCarty, parochial vicar, the residence underwent a complete restoration through the generosity of the Williams family and many other generous parishioners.  Today, the residence is warmly referred to as “The Stone House”.

In 2004, a Capital Campaign was begun to raise funds for the restorative work on the church. In 2005, the congregation moved to the Parish Center for worship and work began on the historic church building.  During this restoration, the pipe organ was replaced with a Johannus American Classic VII Organ; however, the original façade of the organ was preserved.  The organ was dedicated on April 15, 2007.  The original communion rail was returned to the church as a decorative enhancement to the sanctuary and the church’s statues were restored by a talented parishioner.  Also, during this project, structural repairs and maintenance were completed on the church including the replacement of the slate roof, the floor, and total replacement of the electrical, sound, and heating and cooling systems. The choir loft, in danger of collapse, was reinforced and the walls and columns were re-plastered and re-painted.

The congregation remained in the parish hall until August 6, 2006 when the first mass was said in the restored church.  In May 2008, a second capital campaign was begun to reduce the debt.

Saint Joseph Church received a Jane Morningstar Award of Merit in 2007 from the Landmark Association of Bowling Green and Warren County for the restoration. In 2009, the church was granted a tax credit from Kentucky’s Historic Preservation Board. In the summer of 2009, the exterior of the Church Street doors were stripped and refinished by Simpson Bros. Painting. This was financed in part by a grant from the Landmark Association and parishioner contributions.

As of the close of the 2017 calendar year, over 1,000 families are registered at St. Joseph Parish and approximately 3,100 members.